A Guest Post from a Canadian Supporter of Basic Income Ireland

When Basic Income Ireland members do a presentation on basic income, we always get asked about costings. So that’s why we have spent some time working on them, and you can see an example in our leaflet. William Clegg, a members and supporter who lives in Canada, thinks it is important to emphasise other aspects of basic income also, and he wrote the following short piece below.

Greetings, I am very glad to see how far your group has come with your presentations on the BI concept.  The time and effort your group has put into this concept is admirable.

However, if I might be so bold I would like to share my experience with such presentations in Canada over the past few years.  Of course, you’re absolutely right that there are those who will want to see the numbers and you have laid out the income side of things very well.

That said, I like to focus on the people who get bogged down with numbers and charts, but they love to hear that a BI is all about personal freedom, such as the freedom to spend the majority of our years on this planet engaged in endeavours that are more important to them personally; that every second of every day is ours and need not be squandered making some fat cat richer; the freedom to put family, health issues, education, mourning, parenting and a host of other personal needs  ahead of employment concerns.  It seems the idea of far greater freedom of choice in how we spend the limited time we have on this planet  resonates with some people more than numbers.

I also talk about all the Guaranteed Income supplements that we have already such as old age pensions, military pensions, civil servant pensions, student loans, handicapped pensions, welfare rates, farm subsidies, employment subsidies, and so on that each and every one of which as a huge bureaucracy attached to them which would be eliminated with a BI that put the funds into one central BI agency producing a huge downsizing of government and a substantial influx of already available monies.

Then there are the people that are more interested in where the money will come from and one idea that resonates quite well involves a Goods and Services Tax – GST – on everything except, perhaps, food and housing.  People can hide income, and today hiding income has been come a business in itself.  But everyone has to consume and that makes the consumption end the ideal place to tax them.  One undeniable reality of the wealth is that their lifestyles are incredibly expensive with millionaires spending thousands daily and billionaires spending millions daily just to maintain their ostentatious lifestyles. Therefore, It has been proposed that a GST rate of 25% on everything including food and housing would replace all the current income tax rates – and tax loopholes – of many nations.   Around 30% if housing and food is excluded.  Tax rates that are very close to current income tax rates but cannot be avoided with offshore accounts.

But the real zinger on a GST transition is that it allows each and every one of us to control our personal level of taxation.  If we don’t want to pay a lot of tax, then don’t buy a lot of stuff!  But those who are consuming the most need to pay the most as well.  In other words, empowering the individual’s taxation while putting the onus on the rate of one’s consumption of the planet’s dwindling resources.

Then there is the added irony that placing a substantial tax on luxury items and accommodations actually  allows those who love to brag about “how much my xxxx cost…” as a status symbol increased bragging rights :).

If it helps, there is a more comprehensive description of the perceived freedoms and benefits a B.I. offers both the employee and the employer which I presented at the 2008 Dublin BIEN conference. You can find my document by clicking here (it can be found under  Saturday, June 21st, 2008  session 4 – 4e (iii)).

In conclusion, these are ideas that bring smiles to the faces of a lot of people who like the ideas of personal empowerment, freedom of the individual and, tax equity, allowing many to find a much closer connection to what might be a confusing or alien concept.

Thank you for the opportunity to share these ideas with you and I wish Basic Income Ireland all the best in your future endeavours. 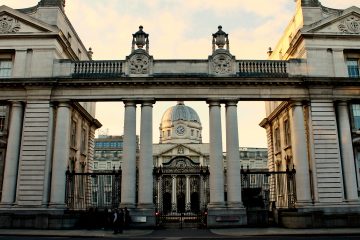 Basic Income Ireland, a national body for the promotion of a Universal and Unconditional Basic Income (UBI) in Ireland, issues the following comment on the proposal for a Basic Income Guarantee contained in the recent Read more…

Universal Basic Income: A brief overview of a support for intelligent economies, quality of life and a caring society

An earlier version of this article was published in April 2013 by Feasta: The Foundation for the Economics of Sustainability. www.feasta.org Anne B Ryan Introduction The system for social security as it has developed in Ireland Read more…